Hello it’s me, Tunji! Towards the end of every semester Wakoku holds some joint classes with other schools. The English ALTs also take part in some of these joint classes. Wakoku is rare in the case that it has 4 English ALT’s working at the school. Not many schools have even one ALT. Most of the joint lessons held with the ALTs are with the neighboring special schools. Due to the pandemic we are unable to go to the schools in person instead we hold these lessons on Zoom. The lessons commonly consist of self introductions from the ALTs and students along with activities about the things we like. It’s an interesting change of pace from 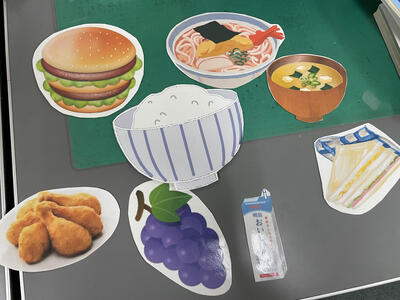 e normal classes that we have at Wakoku. 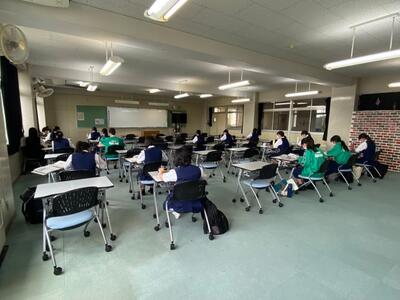 This week at Wakoku, students have been writing their end of term one exams and teachers have been busy working through grading the piles of exams that have stacked up on their desks. Thankfully it’s not been as hot this week as the last, so everyone is feeling at least more physically comfortable now that the mental discomfort has gone up.

Students in Japan write a lot of exams compared to many other countries in the world. Japanese schools divide their academic year into three different semesters. Each semester, students write midterm and end of term exams. These exam periods are in addition to any extra tests and quizzes that are given during regular class time. Students also must worry about things like entrance exams to even get into high school and later again when applying to university.

This leads to a lot of studying. Japanese students are master studiers. Coming to school in the morning during exam week, students can even be seen doing last minute studying on the trains and busses and even some as they walk to school. The amount of effort that they put into their studies and at achieving academic success is inspiring.

Hopefully all of their preparations have paid off and the students of Wakoku will be proud of themselves for their achievements in the first term of this year.

Cultural Festival --- A Showcase of Talents

Before coming to Japan, any idea I had of Japanese high school cultural festivals was mostly from what I have read in manga, which had gotten me very curious and I often wondered if I would ever get a chance to experience it. “My manga was telling me the truth!” was what I had thought when I first experienced Wakoku’s Cultural Festival in 2018. I was blown away. There were so much creativity and talents showcased during the Cultural Festival.

The theme for Cultural Festival in Wakoku this year was “Gameshow”. By making use of the premises of games such as Minecraft and Biohazard and drama series such as Squid game, the classes transformed their classrooms into attractions such escape rooms, casinos (don’t worry, no real money was traded), horror houses or even thrill rides (Yes! Students built a ride in their classroom). Through a play of words (e.g. Class 3-8 used Biohazard as their premise and named their attraction 8nohazard) or the incorporation of their home room teacher’s name (e.g. Mr Sakamoto’s class attraction was Poppy Sakamotime), these attractions were given a catchy name. The students also drew posters by hand and plastered them all over school. Even the staircases were not spared.

Besides the class attractions, there was an outdoor stage where students held the Best Class T-shirt contest, danced to the latest K-Pop tune and played the guitar using the finger-slapping style. Even though the weather was sweltering, the performances on the outdoor stage attracted a large crowd of both students and guests such as parents and junior high school students. It was truly a testimony of how good these performances were for the crowds to endure such heat just to catch them.

Another highlight for Cultural Festival was the student bands. It is common for students from different classes and levels to form a band. Most of them do covers of a variety of genre of music but occasionally, a band will play an original song of their own. It amazes me because such bands are rare in Singapore and being a J-Rock and indie fan, I often read about how professional bands started out playing together in their high school years. Seeing my students play had convinced me that such traditional still holds. Who knows, maybe one of these student bands would turn professional one of these days.

Even though this is my fourth year experiencing a Cultural Festival, I am still in awe by the talents that I see every year. I am sure that this is one thing that I will miss when my contract with the JET Program finishes. 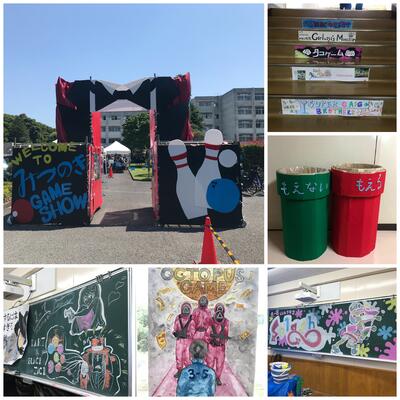 Preparation for the Cultural Festival

On Friday 24th and Saturday 25th of June this week, Wakoku will have their cultural festival. In the lead up to this event, students have been working hard in their homerooms and clubs to prepare for the many events during this time.

Some classes are preparing exciting games with various themes, such as Squid Game, Splatoon, and Minecraft. Many clubs are preparing as well, such as the ESS club, who will perform in the gym, and the Manga club, who will hold an exhibition of their artworks. During this time, the students have a lot of excitement and energy, and are proudly wearing their special class t-shirts.

This will be my first cultural festival, and I am very excited to see what the students have prepared this year. Since I never had an event like this in my high school in Australia, this will be a very unique experience for me.

There will be many games, performances, and exhibitions, so I hope everyone enjoys the cultural festival! 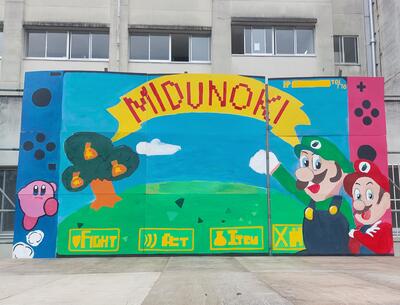 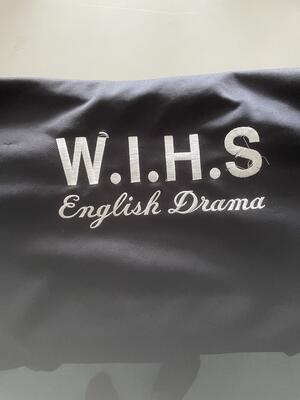 Hello this is Tunji, when I was in high school I wasn’t really in any clubs because there were not many at my high school. I was surprised to see that there are some interesting and unique clubs at Wakoku. I’ve been helping the ESS club with their pronunciation and other things. For those who don’t know, ESS stands for English Speaking Society. It’s essentially an English Drama club. ESS is a very interesting club and the club members are very kind and welcoming. For their productions they get help from people who were club members years ago. This is something you don’t see in the United States. I’m looking forward to their next production.

Recently Wakoku welcomed a new student who is participating in a school exchange program between Japan and Italy. Alessio is originally from Rome, Italy and will be staying in Japan for five months. He will spend part of his time attending school here in Wako and part of his time in Sakado. In Italy, Alessio had been studying Japanese for about a month before departing on his trip. Besides enjoying travelling and experiencing new cultures, he is also a big fan of basketball, cooking, and spending time with friends.

Speaking with him, he seems like a very kind and easy-going person. When I asked him why he chose to come to Japan, he said “why not?” He is looking forward to experiencing and getting to know Japanese people on a more personal level and making connections with new friends. While he is here, he will be staying with a host family so hopefully it is easy for him to achieve his goal of experiencing Japanese daily life and meeting many Japanese people.

I also asked him what part of Italian culture he would like to share with his new Japanese friends and his answer was quick, “the food!” I’m sure everyone would be happy to enjoy some delicious Italian cuisine anytime. He says that he is enjoying his time in Japan and that he thinks the coolest thing about Japan is the mix of old and new everywhere as that is something he cannot experience in Italy. He also says that he likes that the staff and students at Wakoku have been so welcoming towards him as that is not always the case when travelling abroad.

We here at Wakoku certainly hope that Alessio continues to enjoy his time in Japan. If you see him around the school, please take a moment to say hello. 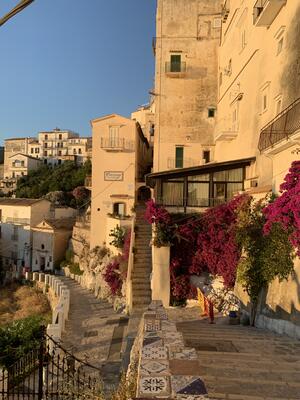 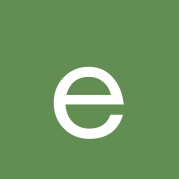 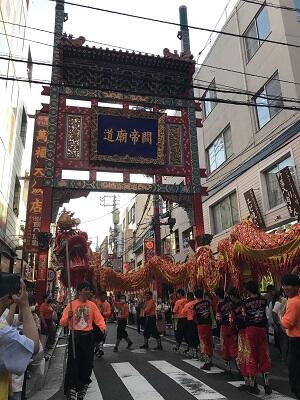 Excitement filled the air this week at Wako International High School as students prepared to go on their school trip, which occurred after the Term 1 Mid-term test. The students were excited and looking forward to this trip as a change of pace after having studied hard for the mid-term test.

These school trips usually take place in a surrounding prefecture. This year, the Year 1 students went to Chiba prefecture to pick clams by the seashore, an activity commonly done in the summer, whereas the Year 2 students travelled out further to Kamakura in Kanagawa prefecture to learn about the history of Japan as Kamakura was the political center of Japan in the late 12th century. Also in Kanagawa prefecture, the Year 3 students had a taste of a different culture in Yokohama as they visited Motomachi-chukagai, otherwise known as Chinatown. 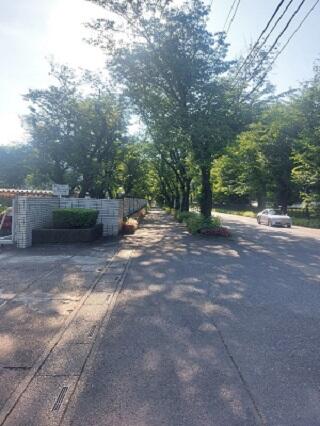 This week, students had their mid-term exams for term 1. For the first year students, this was their first exams since entering high school. Lots of the students were nervous, but everyone has been studying very hard to do their best for these exams.

With spring almost finished, the days are getting hotter, and the rainy season has begun. The hot and humid summer in Japan is very different to summer in my home country, Australia, where summer is very dry.

Many students are looking forward to being able to enjoy the nice weather now that exams are over. Good job to all the students on finishing your exams!

Scenery of Wako and California 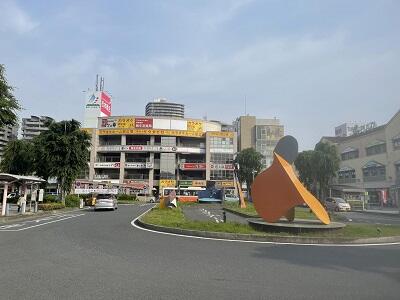 Hello! This is Tunji Kayode! I normally walk to school. On Fridays I sometimes work at Fujimino high school and when I do, if the weather is good I also walk to the school. The scenery of Wako City and Fujimino are quite different. Along the way for both schools I see students I recognize which is interesting since they are sometimes heading in opposite directions, from Wako to Fujimino and Fujimino to Wako. In California it is very rare for high school students to commute a long way to go to school. Most students attend school based on districts and where they live. It is interesting to think about the small differences between our countries. 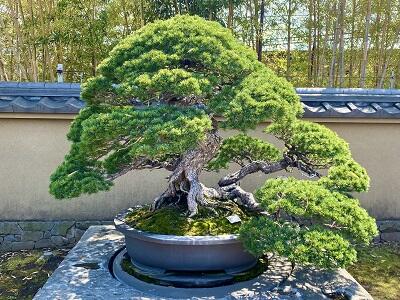 This week was a little different for Wakoku students and teachers. Due to the generous number of public holidays in Japan, everyone was able to enjoy staying home on Tuesday, Wednesday and Thursday. The students have been working very hard since the beginning of the semester and so some time at home to focus on hobbies, spend time with family or catch up on sleep was greatly appreciated. Friday morning it was back to work for everyone but with one question being repeated over and over in the hallways and classrooms: “What did you do for Golden Week?” For me, I visited the annual Bonsai Festival in Omiya Bonsai Village. Golden Week is the perfect opportunity to learn about Japan and Japanese culture for us ALTs.