A Little Taste of Home

Welcome back to school!

This summer, I had the chance to pop back into Singapore for a visit, after not being able to go home for the past two years. To say that I was excited was quite an understatement.

I have always heard about how people would experience reverse culture shock after being overseas for a period of time and I had a taste of it on my first train ride back in Singapore. Having been used to the tranquility of Japanese train ride, it took me awhile to get used to the chatter that is common in trains in Singapore. The moment I got on the train, I was greeted by many different conversations spoken in different languages. In that short 20 minutes train ride, I heard an Indian mother talking to her child in Tamil, a pair of Filipino ladies talking animatedly in Tagalog and a group of girls that looked like they were of high school age gossiping in Singlish. Gone was the tranquility of train rides that I had gotten so used to in Japan. In its place was a variety of conversations in different languages (and sometimes volume that borders on invading personal space). The short train ride itself was a glimpse of Singapore’s multi-cultural society. It was at that moment that the thought, “Ah, welcome back to Singapore!” popped into my head.

Nevertheless, I enjoyed my time back in Singapore tremendously. There is just something about home that settles the heart. Even though I am not much of a foodie (a person who loves food and is very interested in different types of food), I found myself seeking comfort in the familiarity of the taste of local Singapore food, especially those found in hawker centers (non-airconditioned food courts in Singapore). The dish in the picture attached to this article is Fried Hokkien Mee, literally ‘Fujian Noodle’. It is a dish of stir-fried noodles with egg, pork slices, prawns and squid. Even though it is named ‘Fujian noodle’, it is not known to the Fujian province in China and had been created by Fujian sailors who came to Singapore after World War II. I chose to feature this because it is one of the local foods that Singapore is known and the best that I had during this trip back home. Please try it if you ever visit Singapore.

I’m glad I had the opportunity to visit home this summer. This little taste of home had recharged me, and I’m all geared up for the new school term. Looking forward to an exciting school term ahead! 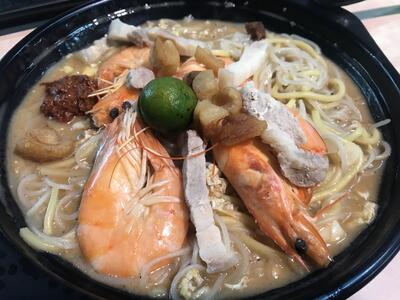